VEKA manufactures profiles for residential and commercial window and door systems for new construction, replacement and remodeling projects. And although it has been producing vinyl extrusions for years, it continues to develop new products.

Walter Stucky, president of VEKA USA, says that innovations and producing new, quality models are of vital importance for the company.

“Those are the essential ingredients for success in the future,” he says. And, Stucky says another vital area is customer service. “From technical response to technical manufacturing, engineering, marketing, research and development, sales support and extrusion, VEKA’s service is unmatched in this industry,” the company says. “It is a philosophy that we adopted from day one and will continue to offer as long as the name “VEKA” stands. Stucky, who was appointed president in 2001, has been with VEKA since 1987. Before that, he spent 11 years in an extrusion company in Germany. Stucky, who is originally from Germany, has a master’s degree in engineering from the University of Stuttgart.

“VEKA’s vinyl laminate is maintenance free and warranted from cracking, rotting, chipping, peeling or flaking. Options such as these enable the customer to differentiate their product from the limited extruded colors usually associated with vinyl windows and doors.

VEKA says improvements of vinyl window and door products are some of the reasons that vinyl’s market share has increased in the past and will continue to grow. “Through capital investments and a constant awareness of the changing market, VEKA prides itself on being a leader in the industry,” the company says. “We have had a major role in developing new technology and expanding the range of products that are available to the consumer.

Today, vinyl is the second largest selling plastic in the world. The vinyl industry now employs more than 100,000 in the United States, according to VEKA.

Vinyl, which is referred to as the “infrastructure” plastic, is used frequently in industries ranging from automotive to windows because of its low cost and versatility. VEKA says that the largest use for vinyl is in construction and finishing products that are used for residential and commercial building. “Vinyl construction products typically are selected for their durability, ease of installation, easy maintenance and appeal to consumers,” according to VEKA. “In many applications, vinyl has replaced traditional materials such as wood, copper and aluminum.” 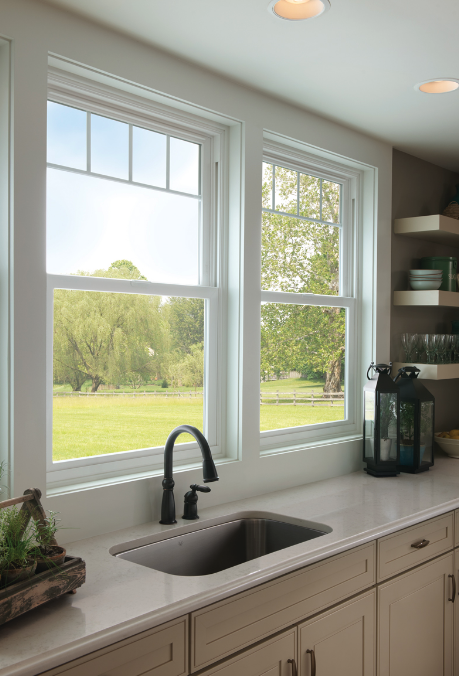 VEKA says that studies have shown how vinyl products are more cost effective in comparison to other building products. For example, taking into account installation costs and maintenance for 20 years, a 1996 study found that one three-foot by four-foot wood double-hung window costs about 10 percent more than a vinyl one. That cost is more significant if you consider the average home has 15 windows.

“Very little maintenance is required with vinyl windows and glass doors,” the company says. “They may require a periodic cleaning with a standard household cleaner but will never need to be painted, stained or otherwise treated to maintain their color and strength. And unlike other materials, vinyl windows will not chip, corrode, crack, peel or rot.”

VEKA says vinyl is strong, durable and resistant to abrasion and moisture. It also can withstand rust and corrosion, is electrically non-conductive and has good fire performance properties. “Because it is less than half petroleum, vinyl is the most energy-efficient plastic,” the company says. “And because it has been used for more than half century, it is one of the world’s most analyzed and tested materials.” It was originally developed by scientists in the 1920’s, who had no idea at the time that product would amount to so much.

Vinyl is composed of two simple building blocks – chlorine, based on common salt, and ethylene, from crude oil. The resulting compound is ethylene dichloride, which is converted at a very high temperature to vinyl chloride monomer (VCM) gas. Through a chemical reaction called polymerization, VCM turns into a stable powder, polyvinyl chloride resin.

A COMMON CHOICE FOR BUILDING

The advantages of using vinyl are making it an increasingly popular choice in construction. VEKA says that in the 1980’s sales of vinyl windows increased dramatically. In fact, from 1992 to 1998, the sales of vinyl windows in residential new construction and remodeling jumped by nearly 125 percent. “Today, most of the major wood window manufacturers offer vinyl windows as well, and vinyl rivals traditional materials for aesthetics, durability, energy efficiency and value,” according to VEKA.